Hudsonville Christian School celebrated 100 years of Christ-centered education during the 2017-2018 school year with many celebratory events. 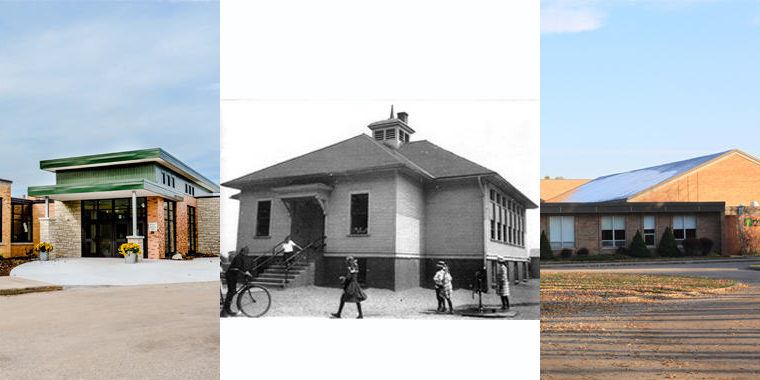 100 Year Anniversary Book available for purchase in the school office

DECADES OF TELLING THE STORY

We are here today because, as members of the Hudsonville Christian School community, we have a story to tell. That story occurs in the larger context of the history of the world around us. Over and above that, we have the perspective that God is working out His story through the people in the world He created. We are people of a story, and we tell that story in the context of a bigger Story.

In 1917 the world was at war and the United States was soon to declare war on Germany. On the edge of Hudsonville, a tiny white schoolhouse emerged on School Avenue. Built for 75 students, it unexpectedly became a three-room schoolhouse after its first day of use in 1917. 90 students showed up that first day, so the basement became a makeshift classroom. Many students sat two to a desk, and a third teacher was hired for $1 a day.

In 1917 The Bolshevik Revolution occurred in Russia, the National Hockey League was formed, the first commercial radio station went on air in Pittsburgh, and John F. Kennedy was born in Brookline, Massachusetts. After the war, this decade became the Roaring ‘20’s and the economy prospered throughout our country. However, the farmers of Hudsonville struggled to make ends meet.

During that first Decade, in 1921, two rooms were added onto the east side of the building. HCS now had four rooms, four teachers, and 120 students. Three years later electrical service was installed.

Our2nd decade is marked by our country’s struggle with the Great Depression. During this decade frozen foods and scotch tape first became available, and TV was invented. Charles Lindbergh was the first to fly solo across the Atlantic, the Empire State Building was opened, prohibition bred gangsters such as Al Capone, and Adolf Hitler came into power in Germany.

Hudsonville Christian was slowly making progress from a Dutch school to an American school. In 1927, the school constitution was translated from Dutch to English, and five years later the board minutes show that “American” was now the official language used in school. In 1930 Edward Wezeman was hired as principal. There were 160 students in four classrooms. By 1933, the Depression had taken its toll on enrollment, which was down to 115. The budget could support only 3 teachers, so the four teachers decided to divide their salaries four ways. Until that year, finances were met with free will collections. Now parents had to pay tuition, $32.50 per year, per student. An exception was noted in the board minutes, though, when they accepted two bushels of onions in the place of a tuition payment.

Hudsonville’s 3rd Decade opened in 1937 as Franklin Delano Roosevelt began his second term and the U.S. recovered from the Depression. Halfway through our 3rd decade, in1941, Japan bombed Pearl Harbor and our country entered World War II. Across the ocean, our world was being shaken by the Holocaust and the use of the first nuclear weapons in Hiroshima and Nagasaki, resulting in the end of the war.

The population of Hudsonville was now 800, and enrollment at HCS was rebounding. The two east rooms in the White School were added, for a total of 6 classrooms. Enrollment in 1944 was just under200, and one room, the 1st and 2nd grade classroom, had 53 students.

During our 4th decade, there was an economy boom and a baby boom. DNA was discovered, the first organ transplants were done in Boston, and the polio vaccine was introduced. The Cold War intensified and the Civil Rights Movement gained momentum. The Billy Graham crusades began and Queen Elizabeth was crowned in the UK. These events prompted a surge in television ownership.

In the first year of Hudsonville Christian’s 4th decade, Hester Monsma was hired at a salary of $1,600 to teach a 1st grade class of 42 students. There were now 6 classrooms upstairs in the White School, two in the basement, and two classrooms were in a house on Oak Street. In 1948 the Oak Street property was purchased for $10,000 and construction on the new building started. Enrollment grew rapidly. By the end of this decade there were 500 students and 13 teachers. On April3, 1956, the final year of our 4th decade, a tornado hit Hudsonville and killed 18 people, injuring many. In September, Gord DeKruyter began his career as a junior high teacher.

Hudsonville Christian’s 5th decade began with Dwight D. Eisenhower’s second term. 1957 was also the year that the Mackinac Bridge was opened, and Dr. Seuss’ Cat in the Hat was published. The Soviet Union launched Sputnik, leading to an expansion of the space program. President John F. Kennedy announced the Apollo Program in 1961 and was assassinated two years later.

Hudsonville Christian continued to grow. In 1957 there were 70 desks in one classroom at the White School, but at least now there was only one student per desk. In 1962 the east wing was built onto the Oak Str. Building. There were now 731 students and 26 teachers. In 1964 there was another building expansion at Oak St. as enrollment climbed toward 900.

The first years of our 6th decade brought tragedy to our country with the Apollo 1 satellite explosion, violent demonstrations against the Vietnam War, and the assassinations of Martin Luther King, Jr. and Robert F. Kennedy. President Nixon resigned following the Watergate scandal.

More than ever before, parents looked for support in raising their children with a Christian worldview which proclaimed the lordship of Jesus Christ in all spheres of life and learning. Enrollment continued to grow. In 1968 land was purchased on Van Buren St. and a nine-classroom junior high was built. New hires that year, 50 years ago, were Bob VanderLaan and Ken deWaal Malefyt. The following year, 1969, the White School was put on the market with a single bid for $5,110, which was not accepted. The very next year, 1970, the White School was re-opened and used continuously until June 2005. In 1971 Karen Ophoff was hired as a 5th grade teacher, for the annual salary of $6,800.

In the first year of Decade 7, Jimmy Carter succeeded Gerald Ford as 39th president of the United States. That year the first Apple II computers arrived, Star Wars opened in cinemas across the country, and Elvis died in Memphis. Nintendo arrived and video games became a cultural phenomenon.

In that year, 1977, Mr. Wezeman retired, and Gord DeKruyter became principal of Hudsonville Christian School. The following year brought expansions at both Oak St. and Van Buren St., and by the final year of this decade, 1986, enrollment passed 1000.

The late 80‘s brought the rapid progression of globalization and capitalism following the collapse of the Soviet Union and end of the Cold War. The Berlin Wall came down in 1989, and the following year the Gulf War began. Personal computers, the Internet and World Wide Web became major media for globalization and the spread of popular culture. Video games, cell phones, email, DVDs, and Microsoft Windows took hold of the world.

At Hudsonville Christian, God’s faithfulness continued. In 1989 the Junior High on Van Buren Street was expanded, restructured as a Middle School. The 6th grade was welcomed from the Oak Street campus, and our 9th graders went to Unity. In1990 Hester Monsma retired after 43 years of service to Hudsonville Christian, and Karen Ophoff became the Elementary Principal. In 1992, we celebrated our 75th anniversary with another $1.1 million addition to the middle school.

In 1997 Bill Clinton began his second term as president and his impeachment trial occurred the following year. In 2001, the September 11 attack on the Twin Towers escalated the fear of terrorism around the world. During this decade, Email and texting became the primary ways of sending messages. The popularity of cell phones and texting surged in the 2000s and enhances our lives, but also has negative effects such as cyber bullying and distracted driving, which claimed the life of one of our students, David Talsma, in 2015.

At Hudsonville Christian, Gord DeKruyter retired in 1997. Bob VanderLaan became the new administrative principal and Dan Pott became principal of the Middle School. Near the end of our 9th decade, in 2005 an 8-room addition was added to the Oak Street building. We sadly remember that on April 25, 2006, one of our graduates, Sgt. 1st class Richard Herrema, was killed in combat in Iraq.

In the first year of our 10th Decade, 2007, Apple introduced the iPhone. The next year, 2008, stock markets plunged and a mortgage crisis fueled a recession in the US, which grew throughout that year into a global financial crisis. In November Barack Obama was elected the 44th president of the U.S. The iPad was introduced in 2010. That same year world population reached 7 billion.

In July of 2007 a group of HCS teachers traveled to Eldoret, Kenya to establish a partnership with a school of the Reformed Church of East Africa. In 2010 Bob VanderLaan retired after 42 years with the school. Dan Pott became administrative principal, and Mary Broene came to Hudsonville Christian as middle school principal. The end of decade 10 was marked by the purchase of Unity Christian’s Oak Street campus, and its renovation as an elementary school with new central offices. The enrollment, including the early education programs, exceeds 1000, and our school, after a few remaining pledges are paid, is debt free. Thanks be to God!

The world has changed dramatically since 1917. Our school has many stories to tell of God’s faithfulness. Hudsonville Christian has seen more than 6000 students come and go. The hands that dug the earth and formed the timbers for that little white school on School Ave belonged to people who had the vision of challenging minds and lives for Christ. Today their children, grandchildren, and great-grandchildren are workers and leaders in the world, and in God’s Kingdom. This is our story, and as we look forward to our 2nd century, we commit ourselves to the legacy of Hudsonville Christian School, moving forward in faith, continuing to Tell the Story, equipping God’s children to be salt and light as they take their places in His world.